A Virologist on Where the Coronavirus Outbreak Is Heading

We begin with the contrast between President Trump’s alternative reality-based projections and false assurances that the coronavirus is under control in America and that there are only 15 cases soon to be 5 and a vaccine will be available very soon and that by the spring the virus will magically disappear. In the real world according to Dr. Fauci the Director of the National Institute of Allergy and Infectious Diseases who contradicted Trump at yesterday’s press briefing by pointing a vaccine could be available in a year to 18 months at the earliest. In addition there are 60 known cases in the U.S. and the CDC expects the outbreak to get worse not as a matter of if, but when. A virologist, Melody Li, a Professor of Microbiology, Immunology and Molecular Genetics at UCLA, joins us to discuss how the coronavirus will not respond to Trump’s political happy talk or efforts to play down the crisis in order to prevent the stock market from tanking which it did today with the Dow posting its worst point drop in history.  Furthermore just two weeks ago Trump proposed drastic cuts to the CDC and the NIH following draconian cuts in 2017 and 2018 congress rejected, along with getting rid of the entire pandemic response chain of command at the National Security Council set up by Obama, whose initiatives Trump reflexively is compelled to undo.

Then we will go to Australia to speak with one on the world’s leading climate scientists Michael Mann, the Director of the Earth Systems Science Center at Penn State University who shared the Nobel Prize with others on the Intergovernmental Panel on Climate Change. The author of The Madhouse Effect: How Climate Change Denial is Threatening Our Planet, Destroying Our Politics, and Driving us Crazy, he joins us from Sydney where he is a visiting professor at the University of New South Wales to discuss how global warming has devastated Australia. But the people who were abandoned in their moment of need are rising from the ashes realizing that the current right wing government which was put into power by the dominant Murdoch press represents mining magnates and coal baron but not them, and they must act before they no longer have a habitable country.

The Author of “Supreme Inequality: The Supreme Court’s 50 Year Battle for a More Unjust America”

Then finally we speak with Adam Cohen, who served as a member of The New York Times editorial board and as a senior writer at TIME magazine about his new book, just out, Supreme Inequality: The Supreme Court’s Fifty-Year Battle for a More Unjust America. We discuss how from Nixon to Trump the court has moved further and further to the right to enhance corporate power and cut taxes on the rich while enabling them to buy elections as they cut education for the poor and limited efforts to protect workers, schoolchildren, criminal defendants and voting rights. 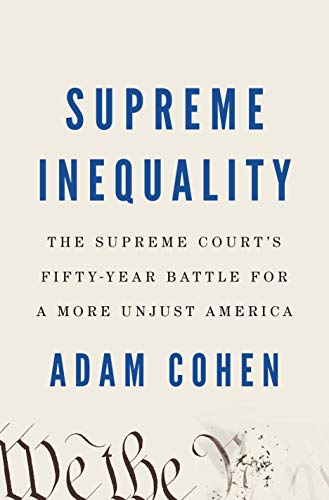