The Dangers of a Plutocrat-On-Plutocrat Election

We begin with the rising political profile of Michael Bloomberg who has already spent some $400 million promoting his presidential candidacy as a Democrat although the former Republican Mayor of New York has promised to support with his billions whichever Democrat eventually wins the nomination. David Dayen, the Executive Editor of The American Prospect whose latest book is Fat Cat: The Steve Mnuchin Story, joins us to discuss his latest article at The American Prospect “Michael Bloomberg and the Dangers of ‘Any Blue Will Do Politics’: The presidential candidate is a mirror image of Donald Trump”. We examine whether Bloomberg’s rise as an alternative for centrist Democrats to Biden’s fading campaign is driven by too many Democrats having spent the Trump era looking for a Republican “daddy” to rein in the toddler-in-chief in order to restore both Republican and American decency. Something David Dayen warns “would be disaster to extend this delusion by actually nominating a Republican to lead the Democratic Party” and in doing so “make a tragic mistake of having a plutocrat-on-plutocrat election that will show that nothing matters in a democracy if you have enough money”. In effect this would be an “act of pure desperation that will alienate giant swathes of the country and put a For Sale sign on our democracy, perhaps permanently”.

Having Transformed the Democratic Party, Has Bernie Already Won?

Then we speak with Georgetown University historian Michael Kazin whose books include Godly Hero: The Life of William Jennings Bryan and The Populist Persuasion: An American History about his article at The New York Times, “Bernie Sanders Has Already Won: Whether he captures the White House or not, he has transformed the Democratic Party”. Since all of Bernie’s Democratic rivals have adopted Medicare For All or the public option, the doubling of the minimum wage, higher taxes on the rich and moving to an economy based on renewable energy, Kazin argues that Bernie has already won.

The History of the Bomb, Now in Trump’s Hands

Then finally on this President’s Day we look into the ultimate power a president has at his fingertips and that is the power to destroy the world by unleashing America’s nuclear arsenal and speak with Fred Kaplan about his brand new book, just out, The Bomb: Presidents, Generals, and the Secret History of Nuclear War. He joins us to discuss how the unthinkable has become more thinkable now that we have a cavalier, incurious narcissist like Trump with his hand on the button, particularly now that this president has a “more usable” low-yield nuke as an option at his disposal. 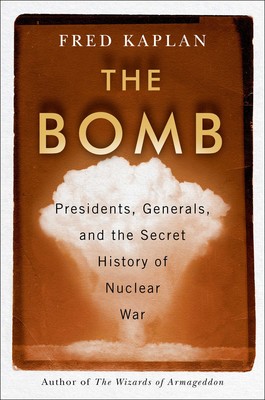