Democrats Mired in Iowa While Republicans Celebrate at the White House

We begin with the continuing embarrassment and confusion over the election meltdown in Iowa with Monday’s Democratic presidential results still not final as the Chairman of the DNC Tom Perez called for a recanvass of the caucus vote saying “enough is enough”. In contrast Donald Trump was triumphant at his White House event today celebrating his acquittal with an upbeat audience of devoted Republican Senators and House members as Trump claimed his poll numbers are stronger than even and the GOP more unified and motivated in their determination to win in November. Ryan Cooper, a national correspondent at The Week who is the co-host of @LeftAnchor podcast joins us to discuss his latest article at The Week “What the Iowa fallout revealed about the 2020 candidates”. And with the botched caucus still overshadowing the New Hampshire primary campaigns underway, we look into the amount of attention this small, unrepresentative state with only 1% of the delegates up for grabs gets, now even more difficult to justify, not to mention the caucus system itself which is fast becoming a national disgrace. With the fingerprints of the Democratic establishment all over the tech trainwreck and James Carville openly questioning Tom Perez’s competence, Cooper predicts that if Sanders were to win the nomination and the presidency, a long-overdue housecleaning of serial loser operatives will take place.

The Buttigieg Surprise Victory If We Can Call It That

Then we speak with Darren Sands, a political reporter with BuzzFeed news covering the 2020 Presidential race and the Democratic Party who just returned from Iowa. He joins us to discuss the surprise victory if we can call it that of Pete Buttigieg in Iowa and how it is likely to impact the New Hampshire primary, then the races in Nevada and South Carolina. With youth both a plus given how wearing the job is and a minus in terms of political experience, we will assess how Buttigieg can exploit his age as an advantage without making the age of Sanders and Biden a disqualifier.

Then finally, with Trump bashing Hunter Biden again today while claiming his daughter Ivanka does not take advantage of her father’s position, we discuss the Trump/Kushner family ties and the dynastic possibilities of Jared and Ivanka’s future prospects in business and politics. Andrea Bernstein, the Peabody and DuPont-Columbia Award-winning co-host of the acclaimed WNYC/ProPublica podcast Trump Inc., joins us to discuss her new book just out American Oligarchs: The Kushners, the Trumps, and the Marriage of Money and Power. 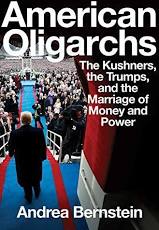