Pelosi Announces the Impeachment of Trump is Going Forward

We begin with the announcement today by House Speaker Pelosi that the House was ready to move forward with articles of impeachment, saying “The President leaves us no choice because he is trying to corrupt, once again, the election for his own benefit”. Harry Littman, a former United States Attorney and deputy assistant attorney general in the Justice Department and Executive Producer and Host of the podcast “Talking Feds” who has an article at The Washington Post “The Wait to See Trump’s Taxes Just Got Longer”, joins us. We will discuss the effectiveness of yesterday’s testimony from the legal scholars and the dramatic press conference today at which Pelosi made her announcement. As she was leaving the press briefing, Speaker Pelosi had a confrontation with a right-wing propagandist from Sinclair broadcasting who parroted the Republican line that the impeachment is all about Democrats hating Trump. Pelosi returned to the podium and replied “This is about the Constitution of the United States and the facts that lead to the President’s violation of his oath of office. And as a Catholic, I resent your using the word “hate” in a sentence that addresses me. I don’t hate anyone. I pray for the President all the time. So don’t mess with me when it comes to words like that”. Pelosi then strode away from the podium as the press corps erupted in a rare outburst of spontaneous applause.

Inside Trump’s War with the FBI

Then we speak with James Stewart, a Pulitzer Prize-winning columnist at The New York Times whose latest book, just out, is “Deep State: Trump, the FBI, and the Rule of Law”. On this dramatic day with the announcement that a third president of the United States will be impeached, we will look into the behind-the-scenes story of the firing of Comey and the beginning of the Mueller Report from which Trump learned nothing since the day after Mueller’s underwhelming testimony, Trump, who clearly cares little about the rule of law, committed the act that has led to his impeachment. 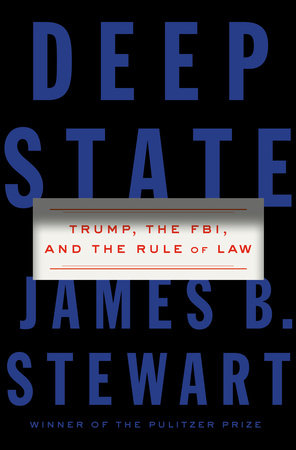 The Danger of Turning to Generals to Solve Political Crises

Then finally we examine the uprisings against unpopular and unresponsive governments around the world, from Iran to Hong Kong, from Lebanon to Chile, and speak with Maria Victoria Murillo, a Professor Political Science and the Director of the Institute for Latin American Studies at Columbia University. She joins us to discuss her article with Steven Levitsky in Monday’s New York Times, “The Return of the Generals” which argues that in overlooking the tragic lessons of Latin America’s dictatorial past, politicians are turning again to the armed forces to resolve crises.