America’s Deadly Milestone of 500,000 Preventable Deaths Had We Not Had Such a Sick and Stupid Leader

We begin with the grim milestone of over 500,000 deaths from the Covid pandemic in America, the vast majority of which were preventable had we not had such a sick and stupid leader who only cared about himself and refused to do what other world leaders did which was to stop the virus from spreading in the beginning. Joining us to discuss the race between vaccination and mutation, now that the virus has been allowed to spread and to mutate into even more infectious and deadly strains is Dr. Angela Rasmussen, a virologist at The Center for Global Health Science and Security at Georgetown University Medical Center. We discuss her article at The New York Times “Does the Vaccine Stop Transmission? How to understand the difference between vaccination to prevent Covid-19 and shots to halt infection.”

Then we examine today’s Senate hearing at which the former Chief of the Capitol Police, the Former Sergeant-at-Arms for the House and the former Sergeant-at-Arms for the Senate testified to explain their lapse in acting on intelligence and responding to the rioters with proper force and equipment before the Capitol was breached, sacked and desecrated by the pro-Trump mob. Joaquin Sapien, a reporter at ProPublica who covers criminal justice whose latest article at ProPublica is “‘I Don’t Trust the People Above Me’: Riot Squad Cops Open Up About Disastrous Response to Capitol Insurrection” joins us to discuss his interviews with 19 current and former Capitol cops.

Then finally we speak with Mike Konczal, the director of the Roosevelt Institute about his new book, just out, Freedom From the Market: America’s Fight to Liberate Itself From the Grip of the Invisible Hand. He joins us to discuss the worst example of the free market in Texas where Texans are now being gouged by the private electric utilities who caused misery, death and destruction and the need to rediscover America’s tradition of taming markets to advance freedom. 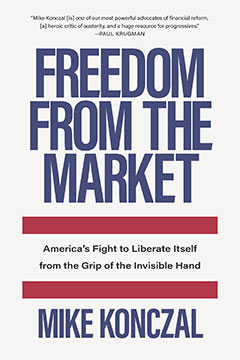